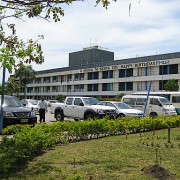 Its been an action time around our hospital premises in recent weeks, with plenty of improvements being made. What was once oncology centre has been converted into the new paediatrics ward known as Ward 2E.
The existing Ward 2E has undergone refurbishment works and ward 12 (the TB ward) will be move into the 2E space.

Ward 12 will be fumigated and some work will be done to secure the area that is worked on. Then, Ward 6 (psychiatric) will move into ward 12 in the next few weeks. Ward 6 and 2E will become the new wards for TB patients. 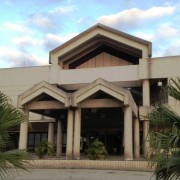 PORT MORESBY, Papua New Guinea (PNG Post-Courier, Oct. 28, 2013) – Port Moresby General Hospital will become a statutory organisation starting next year, which means it will have a budget of its own, says Prime Minister Peter O’Neill.

Currently, the budget for the hospital as well as all the other health facilities throughout the country go through the Health Department.

“This is the beginning. Next year, we want Port Moresby General Hospital to become a statutory body, will have its own budget, look after its own affairs, its human resource capacity so we can look after the patients better,’’ Mr O’Neill said.

He announced this while on a visit at the hospital yesterday to see for himself how the upgrading and renovation works were going on.

He was happy with what he saw, the finished product of the first of the 12 wards that had been renovated.

It cost only K1 million to have the ward, once occupied by cancer patients, turned into a new building as compared to K13 million spent on the accidents and emergency department. He also visited the two acute children’s wards and TB ward, the next ward that has been prepared to undergo refurbishment.

PMGH board chairman Sir Theophilus Constantinou said during the visit that it would cost about K1 million to renovate the other wards, which would have similar paint colours and beds.

Sir Theophilus said the buildings were solid and the workmen were just renovating them.

The refurbished wards will be refitted with new beds, with the first lot to arrive from overseas next week.

PMGH nurses will be trained on how these new beds are to be used.

Normally, the government’s allocation of funds for the hospital goes through the Health Department, but this year the Government had given K50 million directly to the hospital for the refurbishment program and the PM was pleased with the outcome so far.

“It shows that with little we can do a lot. We don’t have to look elsewhere,’’ he said.

He said health and education were on the top priority of the Government this year and negotiations were now on to either continue the same amount or increase the budget for these two sectors next year.

“It’s taken 40 years of neglect, we can’t fix it overnight, be patient with us but in five years time we will do something,’’ said the Prime Minister.

“The renovations at the wards as well as in other parts of the hospital has really uplifted the hospital image, it is very obvious.”

He said if other hospitals in the country were run well, they would also become statutory organisations like PMGH.

Meanwhile, the hospital chief executive officer Grant Muddle told the Post-courier after the visit that the hospital currently had 300 job vacancies to fill despite a few attempts to recruit.

The Department of Personnel Management had also approved the hospital’s request to start recruiting 50 overseas nurses, 20 of whom will arrive from Fiji next week.

The national Department of Health is also in the process of recruiting a specialist the hospital does not have, and plans are afoot to go overseas for more if the recruitment drive for specialists locally are not met.

When the hospital becomes a statutory organisation, he said it would mean that the hospital can negotiate its own terms and conditions for its individual workers rather than going by the limitations set by the Health Department. 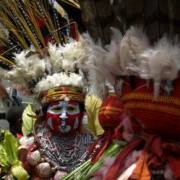 Volunteer and project manager trainer, Monika Vnuk, is changing the lives of Papua New Guineans through her work with the Australian Volunteers for International Development (AVID) program.

Working at the Papua New Guinea Institute of Medical Research over the past nine months, Monika has created and led training courses for Papua New Guinean staff to help them implement projects to combat communicable diseases and improve maternal and child in PNG.

‘I developed and ran a two-day project management training course for staff, assisted with drafting their safety and security management plan, as well as their policies and procedures and procurement processes,’ Miss Vnuk said.

‘Next year, I plan to set up a seminar series to target project managers, including mentoring staff, resourcing projects, evaluations, project reporting and leadership skills.’

While in PNG, Monika spent time in several communities including Madang, Maprik, and the remote town of Goroka where she continued her work in running training courses to help give local Papua New Guineans the skills to set up a broad range of projects including health projects to combat sexually transmissible infections, HIV, and malaria, as well as improve maternal and child health.

‘The people really make PNG—they are lovely and welcoming, especially the women and the gorgeous children.’

‘Every placement has its ups and downs but on the whole it has been an amazing experience—I’ve learnt so much, not only about PNG, but about myself as well.’

The Australian Government has supported an estimated 15,000 Australians as volunteers in developing countries as part of its overseas aid program since the 1960s. In 2011–12, more than 1,500 Australians spent some or all of the year in a developing country to make a difference to the lives of people living in poverty, and to make the world a better place. 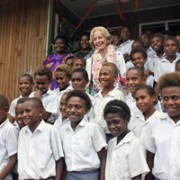 On her first day in Port Moresby, the Governor-General was welcomed to the Hohola Youth Development Centre by students performing a ‘sing sing’ in traditional dress. Hohola is a vocational training centre where disadvantaged youths are taught practical skills and trades including carpentry, hospitality, mechanics, sewing and computer use.

AusAID has assisted the centre through its Incentive Fund Program, which has been supporting the delivery of essential services and infrastructure in PNG since 2000 through incentive-based funding to well-performing organisations. The fund has contributed around $4 million to Hohola Youth Development Centre which has been used to build classrooms and workshops, as well as the assembly hall in which the Governor-General gave a speech. Enrolments have increased from 430 in 2005, to more than 660 today.

The Governor-General paid tribute to the centre’s staff and students, and underlined the importance of Australia’s contribution to education in PNG.

‘Australia has contributed more than 110 million kina ($50 million) toward subsidising school fees since 2010, helping more than half a million children to attend school each year,’ she said. ‘It is exhilarating to be among students who are pursuing their studies with enthusiasm, seizing opportunities that will bring confidence, jobs, income security and independence.’ 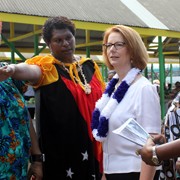 The Australian Sports Commission and the National Rugby League will deliver the program in partnership with the PNG National Department of Education and PNG Rugby Football League. The program will be funded by AusAID through Australia’s aid program in PNG.

The three-year program commencing in 2013 will deliver up to 100 resource kits and train up to 500 teachers.

It will include clinics to develop physical skills and teamwork as well as books and other learning materials to help with maths and reading. 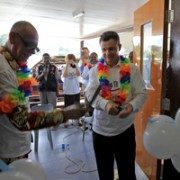 The ward comprises six isolation rooms that meet international standards for isolation of airborne infections in addition to a 16 bed ward for recovering TB patients. The facilities will help improve infection control and reduce the risk of transmission of TB, particularly drug-resistant strains, from patient to patient.